I’ve already come to terms with the fact that I don’t fit in the “academic” music world. I don’t fit in because I wasn’t able to find any inner freedom there. At the same time, I consider music and singing to be the only language which produces such freedom. I am able to express through song pain and pleasure, sadness, and even anger, love, passion, and deep desires. 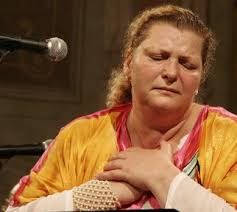 I consider the biggest gift of my life to be that I have come in contact with the Roma spirit. Such a spirit is embodied by my dad and his entire, wonderful family. When it comes to music, my dad for me was the most important role model and teacher. He taught me to love music and taught me how to connect to the depths of my soul through it. My dad was the best dad in the world. He always told me that he would be able to die happy if I stuck with music. He used to say that if I made music, everyone would understand me. He thought that music is the most powerful language in the world and is incredibly powerful. And not even the most well-versed philosopher can explain where this power comes from and why each of us experiences and feels it as we do. My dad was my greatest and most loyal listener. From the first time I said down to play piano at the age of six, my dad was always sitting there next to me, listening. I always had someone to play for, because he had a very good sense and awareness of music. Once, when after two years of practice I was able to finally play Mozart, I noticed out of the corner of my eye how my dad had tears running down his face and was overtaken by emotion. When I was nine, he announced that he had bought a cello and that I was to learn to play it. I remember how happy it made me to play for him. When I later rebelled and wanted to be done with music, my dad kneeled before me with tears in his eyes and begged me not to quit.

That’s just the kind of person my dad was. It was sad considering that he had such a big Roma heart, yet was ashamed of his heritage. Of course there was nothing to be ashamed of. When I brought home and started to play one Roma song which I had heard in a Roma film, he told me what I was playing – the basses in my left hand? He sat down next to me and taught me the entire baseline. It was such a big difference and immediately I understood the life that he had breathed into that song. I now understand that this was his way of communicating his Romaness.

My sweet Dezo, who is also Roma and composes songs for me and our Chavorenge, is the same way. Dezo cannot read music and has regretted this a few times when he’s been composing his songs. Having a musical sense is a way of life. It’s part of Roma culture and Roma harmonies have a strong connection to identity, they are magnificent. I completely felt at home in this music and culture when I was alone, travelling the world after my father‘s death. I began to play and sing completely differently. I had no idea that I had so much strength within me. I travelled a chunk of the world with just myself, my piano, and my voice. I found in my Romaness and that’s why I realize more and more how much we can learn from the Roma. Roma and Roma children have an important mission and place in this world.

I performed alone, playing the piano and singing about a soul. That’s when I really understood what the word solitude means. I realised how big the world wars and yet how small, lost and alone I myself was. I sang until I was a hoarse. I sang with a voice and without one. The one thing which drove me forward was not to give up and to believe in my dreams – the same dreams which provided me with light and hope during my darkest time.

And what about Chavorenge? I give all of these children a chance. Either they take it or their light goes out. Because talent alone is not enough. It’s the same with our inner fire. Either we let it live it’s life and take care of it responsibly, so it doesn’t burn things around us or we let it go out.

It’s our responsibility to teach our children this. Over the past twenty years I have met a lot of Roma children from poor backgrounds, who were hurt by society’s social exclusion and stigma from being Roma. They were hurt so much in their short lives, that what the had endured made it seem like they had already gone through a lot. As a result, the hardened and were not able to grow any further. They quit working on themselves, stopped blossoming, and in the end, their talent was useless. They lacked support from their families and communities. They were in need of Roma role models, especially when so many role models deny their Roma heritage. At the very least, I hope that the experiences that these children had with us will remain with them and that they will have functional families and want a better life for their own children.

The older I get, the more I understand my dad and whom I thank for the wisdom and message that I am able to responsibly offer the world. For me music is humility, truth and freedom. All of this is a huge responsibility towards life itself.

I am not able to change the world. But the most important thing for me is to pass on what life has given me. There is definitely a point to all of this. God, I am so thankful for such a great gift!

The Chavorenge children are my shining stars, and I love them from the bottom of my heart.